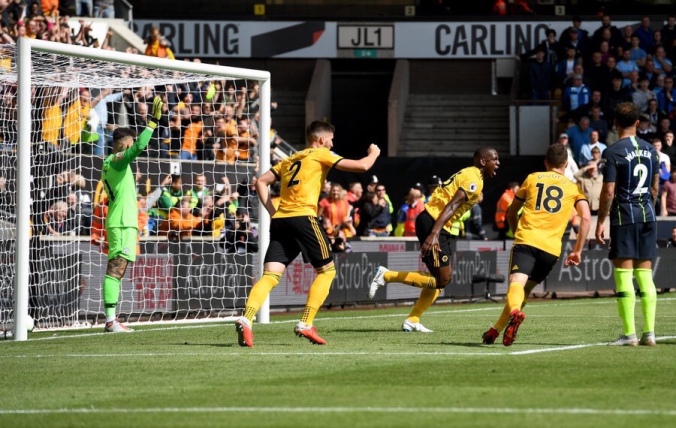 I spoke earlier in the week about how this game was a real showpiece event for Nuno. It was his chance, on home territory, to pit his wits against one of the great footballing minds of the modern era and arguably the best football team that has come to Molineux in generations.

I say that without any nuance, any cheek or any delusions of grandeur. This City are the real deal and will be in the reckoning for the Champions League for a few years yet. Nuno may speak about how ‘we never change’ but we actually employ quite an adaptable system. The 3-4-3 can be possession-based, it can pin teams back and it can defend in a deep, low block. This incarnation of Nuno’s Wolves was counter-attack in it’s purest form.

When it comes to Man City, you have to accept that they will create chances, so it’s always important to maintain a threat going the other way. Raul Jimenez is essential to this and the humility to work, but confidence to challenge the likes of Vincent Kompany, encapsulates the team ethos nicely. City will recall this as one of their toughest games of this campaign when it comes to its conclusion. We have players in our squad verging on being referred to as world-beaters. They have every right to play with swagger and near-arrogance. Ruben Neves is a marvel and Joao Moutinho has pretty much done all there is to do in the game. But they maintain that humility, using their intelligence in a way that our fanbase seems unable to comprehend.

Why are Neves and Moutinho too similar? Why is it impossible for players to adapt to the game the occasion calls for? We’ve spent too long watching bilge run across our midfields to recognise a player who can turn his hand to any kind of midfield role. Did you see the Portugal team that won the Euros? It was a dog of a team, with the entire creative burden laid at the feet of one man. But Moutinho was at the heart of that, diligently performing the role he was asked of and required to do. This is where we need to realise we’re operating on a different plane here, with multi-skilled, multi-faceted footballers who can give the game what it needs, rather than what they want.

Jonny, a tiresome presence on the flank, must be a nightmare to play against for a winger. He’s snappy in to the tackle and as Richard Hobbs from the Fancast remarked in the Whatsapp group, seems to be the first Wolves full back in years who actually stops crosses from coming into the box. His cramp came as no surprise to me and his relationship with Jota bodes well, banishing memories of Barry Douglas to the past.

Jota and Costa looked to have bucked their ideas up, with Costa especially providing Benjamin Mendy with a few GIFs to tweet from his account – although that throw-in deserves to be hall of shamed for it’s idiocy. The competition for places is hotting up and Adama Traore’s contributions so far feel like a bunsen burner to Costa’s backside right now. He responded well.

I could go on through the team and individual performances but I’ll leave the final word on that to Willy Boly, a man mountain who was forever praised for his nonchalance and serenity last season, but this time proved his ability to impose his defensive authority. The sight of 6’4″ sliding in to block and make challenges is a slightly irregular one for Wolves fans but he is another who operated in the manner the game required and showed exactly why we were all so confident about his presence at the club this season. The goal was symbolic, if a little comical and I wager he’ll be a big threat to goal over the course of the season

And so I arrive at my message to us Wolves fans. For too long we’ve had an inferiority complex when it comes to the Premier League. Perhaps rightfully given our last two feeble attempts to establish ourselves amongst the top table. But even in the weeks building up to the City game, we’ve been like the awkward guest who doesn’t belong at the party.

We came in overdressed, bow-tie, tuxedo and shiny shoes, we shuffled about on the periphery, awkwardly laughing at the first sign of a bad joke, too scared to ask for a top-up on our Prosecco. But you grab that Prosecco Wolves fans. Pour yourself a glass. Act like you own the place a little bit. Be the conversation, make the bad jokes and for God’s sake tone down the dress code. We’re comfortable here, in our jeans and our polo shirt. Little-by-little we are announcing ourselves as part of the elite, as an upwardly-mobile group. Not yuppy upstarts but a genuine force to be reckoned with. It’s time for us to exude a little of that team ethos. Be confident, but when it comes to our work have the humility to execute it. Trust in Nuno. He’s taking us places that we’ve never been before. And when Pep is singing his praises post-match, that should be good enough for all of us.