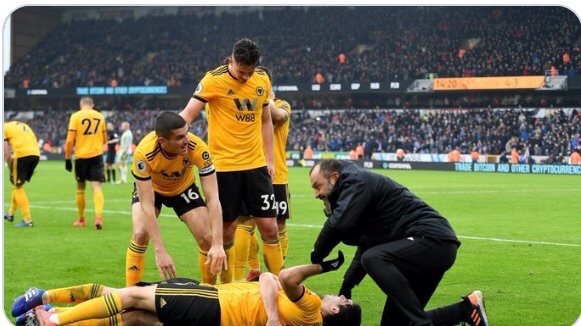 Wolves 4-3 Leicester. We’ve heard that one before. The plot was slightly warped from the prequel and there was an upgrade in terms of the cast, but there was a familiar ending here – a late, late winner from an Old Gold shirt.

Thinking back to before the game and my own expectations of it on Saturday morning, I honestly had a bit of a borefest in mind. This is a Leicester side, who not unlike ourselves, often struggle against teams of structure and organisation, but have picked up some positive results when able to counter-attack against some of the more highly positioned sides in the league. Having seen some of our own attempts to break down more stoic opposition in recent weeks and some of the difficulties we’ve encountered, I honestly thought someone would need to hold a flame beneath this fixture to get it going. How wrong I was.

What a difference a goal makes. It’s no secret that goals change games, but the most striking thing about the early stages of this game was how quickly we came out of the blocks. Nuno’s selection of Ruben Vinagre pointed towards a more direct approach and we duly applied the pressure to a fragile group of players. Ruben Neves set his own intentions with a wonderful curling effort at goal that was a genuine sign of things to come. We also had the sight of Diogo Jota bullying his way into the box to get on the end of a ball he was second favourite for – he has clearly got the bit between his teeth.

The first twenty minutes were exactly what we need to do against teams at home. There was a raucous atmosphere, driven on by a team that were sent out with a mandate to press and to press like hell. We ravaged Leicester and they couldn’t get a foothold in the game until after Ryan Bennett had nodded us into a 2-0 lead, towering over old ‘Slabhead’ in the process. Naturally, there was a settling down period at this juncture, but while we reverted to type in much of our set up, we allowed Leicester to find their own feet in attack. Even Claude Puel can’t bore us when there’s a forward line featuring Demarai Gray, Jamie Vardy, Harvey Barnes and Ricardo Pereira. Gray in particular was influential for the remainder of the half and Rui Patricio was called upon a number of times, as well as calling upon himself to almost gift Jamie Vardy a goal. It would be too simplistic to suggest we missed Willy Boly, but having then shifted Jonny to the right flank, the left side of our defence was decidedly less sturdy and it was this channel that Gray exploited to pull one back.

To see us drawn level at 2-2 in such a quick turnaround was a shock to the system, but this is a trope of modern-day football and the pressing game. Teams often score goals in flurries during spells in games when the tide seemingly can’t be turned and as much as we made a number of mistakes in the build-up this felt like a momentum swing at play. Fortunately for us, we’ve got Neves…

It’s been a long time coming, but this was the kind of performance that got us all wagging our tongues in excitement for Neves’ arrival in the Premier League. He and Jota seemed to have a telepathic understanding on Saturday, such was the number of times they linked up, but the man with a sand-wedge for a foot was irrepressible. Here he was commander of a ship that hit some choppy waters, but he steered us to safety with some missiles from downfield. The third goal was one for the scrapbook, from the way Neves steadied himself to deliver the pass, to the very deliberate loft and angle he put into it and finally the absolute perfection of the run and first touch from Jota who left the oil tanker that is Wes Morgan trailing in his wake.  To Morgan’s credit, in his own inimitable leadership style, he got his team back level once more, but there was too much encouragement in Leicester’s backline for that to be the end of the goalscoring, Neves again puncturing them to the point of deflation and Jota making no doubt that Wolves would be taking home the three points.

A hat-trick is a truly wondrous thing, but sometimes they can almost happen by accident. I’ve seen hat-tricks from players who operate by coincidence, not really affecting the game in any way other than via the scoresheet. Diogo Jota’s grubby little fingers were all over this game, buffeting his way around the pitch, with Nampalys Mendy a particular casualty. There’s an earthiness about Jota’s game, with it’s basic foundation pure industry and desire. None of our other forwards are quite like him and he’s an almost Hulk-like presence when he’s at his fearsome best – you won’t like him when he’s angry. Nuno may have joined in the celebrations at the fourth goal because he couldn’t help himself, but there’s the semblance of a father-son relationship between him and Diogo. He spoke warmly in his post-match interview about him and he remains the player who has turned out for him more than any other individual. He is Nuno’s on-pitch presence.

Elsewhere, Ruben Vinagre showed why he is an asset in games that we are looking to impose ourselves in as he made himself known to a slightly ailing Danny Simpson. In a frazzled game, the defence didn’t cover themselves in glory although the brute that is Leander Dendoncker had bis best game in a Wolves shirt. Our very own action man, Dendoncker is like a bull in a china shop that tidies up after himself. He operated as Moutinho and Neves’ personal bodyguard and they thrived with him backing them up. The £12m fee is going to look like a snip in years to come.

There was much to admire about this game and frankly, nobody will remember the defensive issues that caused such a frenzy of a match. Even Nuno himself, who would no doubt have been livid had we not won this game, afforded himself a moment of pure joy, which inspired the title of this blog. You simply can’t help but be swept up in the emotions of a last minute winner in a topsy-turvy game and when you do experience it, you almost don’t want to win games in any other way.

As long as we keep winning of course.