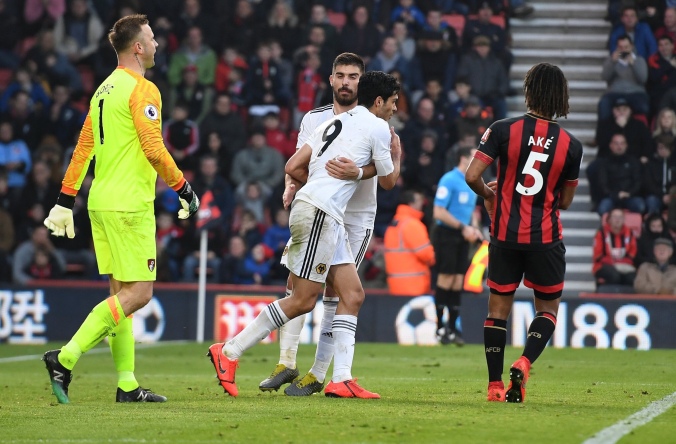 Games against Bournemouth have a habit of leaving a sour taste in the mouth. All credit to them for their climb up the divisions against all odds and certainly against the stature of the club as a whole. But each and every time we come up against them, certain characteristics seem to shine through. We managed to rise above it at Molineux and dealt with them as comfortably as anyone this season. But down on their own territory, where they hold a little more sway, where they play to their own rules.

This doesn’t excuse Roger East of course. What wasn’t really too nasty and combative a game led to 10 yellow cards. This is the sign of a man not in control of the game. I’m not one to talk about refereeing decisions or the influence of a referee, but it really is impossible to ignore at times. To the naked eye, East perhaps delivered a more entertaining game than may have broken out if he didn’t decide to intervene with his interpretation of refereeing a football match. With each decision that he made, someone was irked and that fury and emotion distorts performance levels.

With Bournemouth taking the lead, through what I would define as a soft penalty, if a penalty at all, they had the upper hand and with a referee almost able to bend to their own will they began to dig their claws in. Don’t get me wrong, again there is plenty to admire about Bournemouth. Nathan Ake is an excellent defender, Adam Smith and Ryan Fraser linked up well down the left and Josh King was a good outlet throughout. But Eddie Howe’s teams do enjoy their time with referees and going back to Harry Arter’s interventions back in the 2014/15 season, it’s not a surprise that this game was laced with controversy.

Ignoring the refereeing ineptitude, we actually started the game well. Diogo Jota continues to put in some good work and he looked our likeliest route to goal, although his mate Raul Jimenez wasn’t quite on his wavelength. This is perhaps down to the fact that Jota spent most of his time in direct combat with Chris Mepham and Jimenez was facing up against the exceptional Ake. While we got into some very promising positions down the left hand side in particular, we couldn’t seem to fashion any proper chances. In the first half the only one that sprung to mind was when Jota bullied Mepham and his cross-cum-shot was disappointingly wide of the post and out of the reach of Jimenez.

While our midfield triumvirate of Neves, Moutinho and Dendoncker has been the source of our strength in recent weeks, they weren’t quite grabbing the game by the scruff of the neck. Dendoncker in particular appeared to be struggling with the diminutive Ryan Fraser. At times it was like watching an episode of Tom and Jerry, with the relative giant Dendoncker being tied up in knots. We also struggled with our distribution from the back and Rui Patricio’s poor kicking led us in to trouble on a couple of occasions. Fortunately, Dominic Solanke was rubbish enough to miss any decent openings that came about.

One thing you can count on these days is hen we really need something to happen for us, Matt Doherty is usually the one to instigate it. Here it was via the medium of winning a penalty, but it’s telling how when in need of a goal, Doherty suddenly takes up positions in the penalty area anytime we approach the box. It’s amazing to think our right-wing-back is at times our most potent threat, but this is the level of confidence he is playing with and the level of responsibility he now takes.

Adama Traore also made a positive contribution from the bench, once again with a simplified, pared-back game plan in his head. The way he lingers out on the wing and allows Doherty inside to enter the box  There’s certainly more that can be made of that. I’m not suggesting Doherty plays as an inside forward and Traore as a wing-back but in a more intricate way during the build up of passing moves, they can manoeuvre themselves into those positions.

East obviously did his best to ensure Bournemouth still had their chance to take victory from this game, but perhaps King thought better of it with his penalty. In the end, this game probably won’t live too long in the memory. Ultimately, we didn’t do enough to win it and didn’t really deserve to lose it either. Bournemouth created the better chances, although we had much of the play throughout. It’s a point from a game which we could have had nothing out of. We move on to Huddersfield and Cardiff, confident of 6 from the next 6. If we want 7th, that is what we will need to achieve.